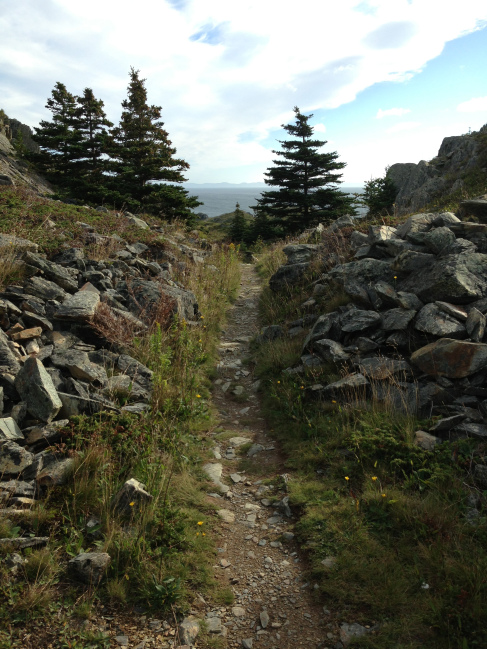 Today I Went Hiking. By Myself.

Today I went hiking. By myself.

The morning started out beautiful. Clear, cool, 60 degrees. After the last three days of wind and rain, there was no excuse but to get outside. I drove to my favorite trail access point. I like it because it spills into a wide green valley full of wildflowers, and the trail cuts close to the water crossing several small coves and hidden beaches. Usually, my kids and I spend hours exploring the coves and searching for spiraled shells and starfish, but today I don’t make it that far. I walk about a hundred feet toward the valley and for some reason I panic. Suddenly, I think of everything that could possibly go wrong. I imagine rapists and murderers, moose and bear. I imagine twisting my ankle or stumbling over the edge of the cliff. The wind picks up and that scares me. A butterfly erupts from the coneflower at my feet, and my heart pounds. I decide to call it a day. As I turn to leave, an older man pulls up in a blue pickup. He climbs down out of the truck and a little dog climbs out after him. They smile and head toward the valley. I am sure they think I am pathetic. I am sure they sense my fear. Two nights ago, I finished a book about a woman who hiked eleven hundred miles by herself. Eleven hundred miles. Alone. And I can’t hike seven. I get back in my car, but instead of heading left on the main road to go home, I turn right. I drive along the coast for a while until I come to another access point. I pull over, get out of the car, and start walking. This time I don’t stop.

Shortly after my first child was born, I was certain I was dying. I was in and out of doctors’ offices with symptoms of a tight chest, shortness of breath, and a rapid heartbeat. I would wake up in the middle of the night gasping for breath, terrified. I saw cardiologists, and I saw pulmonologists, but it was my family doctor that finally diagnosed me with anxiety, a common symptom of postpartum depression. I was floored. I had never been an anxious child or young adult. I was always healthy and happy and relaxed. It wasn’t until I was married and had children of my own that the fear began to creep in. It wasn’t until I realized what I could lose that I began to fear what I had.

The trail is narrow and framed by tall, thin pine trees. I am still nervous, startling at every creak and snap. After a while, my neck is sore from turning around to check behind me. I don’t know what I think I’ll find, but I think that’s what scares me the most, not knowing, not being one hundred percent aware and in control of my surrounding. My husband likes to say that there is no reward without risk. He wants to buy a house in France or Thailand, he wants to open a restaurant, he wants to go to law school and dive for scallops and go sea kayaking, and so do I, but the night before, while he’s sleeping, I’ll be panicking, and when it’s time to climb in to my wetsuit or sign the loan papers, my heart will be banging it’s way out of my chest.

When I was a child, I had a reoccurring dream that someone was chasing me. I could never see them, but I could feel them there. I was always outside, it was always night, I was always in my own neighborhood, and I was always running as fast as I could. When I would wake, sweaty and breathless, I knew my dream self was still running, and my dream house, with the burning square of lit window, was still miles and miles away. Sometimes, I still feel like I’m running from something, but I’m beginning to wonder if all this time I’ve just been running from myself.

A mile or so in, I stop looking around in fear and instead, I find myself looking in curiosity. The wind chimes through the tall grasses like tiny bells, and gulls call to each other from the rocky beach. I eat handful after handful of wild blueberries as I curve through the woods, and suddenly, I look up to notice that I am in the same valley from which earlier this morning I had fled. The man and dog are still there, a pail of blueberries swinging between them. The man waves and I wave back, and then I turn around and head down a different trail. I am more confident now. I recognize this trail from when my husband and I had hiked last weekend. I remembered telling him how alive I felt, how the trail and the enormity of the sea gave me an energy I didn’t recognize. Why could I feel that abandonment and security with him, but not with myself?

When my husband first started traveling for work, I was a young mother and wife, and I was desperately terrified of failing at both. Being home alone at night was hard because when the lights went out, my cruel, self-deprecating mind turned on. I would spend night after night tossing and turning, unable to sleep without the sound of his breath to distract me. I would turn on all the lights in the house and coax a drowsy child into bed with me. The sense of another person was the only thing that would comfort. Eventually, I wasn’t scared anymore. Eventually, my mind’s chatter quieted, and I got used to his absence so much that when he was home, I was often startled in the middle of the night by the weight of a body next to mine. I guess it takes time to find comfort and confidence in yourself. I guess it’s a lot of sleepless nights, a lot of backpedaling, and I guess it’s a lot of small steps forward until you realize your there.

When I was younger, I thought I was a strong, independent woman. I thought I was fearless. I had no idea what any of those words meant. I didn’t know that the only way to be strong was to overcome weakness or that to be independent meant breaking away from my own securities and learning to trust myself. I couldn’t know then that my biggest fears would be in the limitations I put on myself, and it would take many years and hundreds of miles to find the courage to release them. Today, I walked three of those miles. It was a few small steps, but it felt like a hundred.