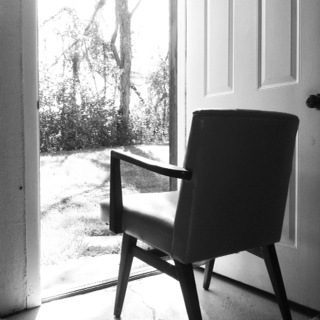 The days are sliding into one another, and I’m having a hard time keeping track of the date and time. Today, I noticed that I only have 6 days left. This is incredibly unfortunate considering it took me a few days to settle in, and now that I’ve dusted off the creative side of my brain and finally feel like I’m beginning to accomplish things, it’s almost time to mourn my return. I’ve got some decent work done here and I still have some goals to reach before I leave, so I’m planning to stay focused and trying to stay away from the Internet as much as possible.

The highlight of the week is that the bugs have ceased. Of course I called the exterminator, but there was a serious wolf spider infestation in my cottage, and it was becoming difficult to breathe. After I killed the ninth one in my studio and woke up with one staring at me from the wall of my bedroom, I called in the troops. I feel like I ordered a genocide, but I had no choice. It had to been done. I could no longer share my space with them and maintain a grasp on my sanity.

A new poet moved into my cottage. She is lovely. She is from Minneapolis and is very cute and very earthy. I like earthy people. Apparently, she and her boyfriend just returned from a canoe/camping trip. I guess that is where you canoe down a river, get out, walk around a little, pitch a tent, sleep, repeat. She said it was pretty amazing. I’ll take her word for it. It’s nice to have another poet here. Poets are such unique artists. We both laughed at how we have studios because neither of us plans to be in them very often. I’ve been walking a lot, taking notes, reading. I’ve been using my studio for research and revision, but it’s difficult for me to produce new work in there. I get claustrophobic. I start to pace. I’m learning to accept the organicness of my process. I’m learning to see it as a channeling. My time here has afforded me the space I require to think, not just poetically, but internally. My jaw is not clenched here, my shoulders and neck slack. I’ve had no headaches, no struggles to get out of bed. It’s suddenly clear how the way I am currently living my life is so bruising, not only for me, but for everyone around me. I need to focus on restructuring my life. I need to allow space to be human.

There are a lot of filmmakers here. They all talk about a lot of films that I know nothing about. The other night we watched “The Skin I’m In” by Almodovar. It was crazy and intense, and it turned me on to what a film can do. I’ve never realized before how intertwined all of our art is, visual, film, writing, we are all seeking the same truths, the same reaction/engagement with our reader/viewer. Last night we drank wine. The filmmakers talked a lot about film, but I couldn’t engage much because they kept saying things like, “remember that one movie with so and so” or “oh yeah, that was amazing. It reminded me of such and such.” I didn’t want to tell them that it was only a few years ago that my husband and I got cable, and we certainly don’t have HBO. I also didn’t want to admit that my time and budget don’t allow me to go to the theatre too often; however, I understand the importance in what they are doing. I understand the obsession with the subject, the intensity of the message. I felt like I should be taking notes on everything they were saying. I have been trying to remember to write down books and movies that people have been mentioning here, but by the time I get back to my studio, I’ve usually forgotten what they are. I’ll have to ask them for a complete list. I imagine someone asking me for a complete list of the best poems of all time. It would take me weeks to compile such an animal.

Tuesday we watched the debate. It was a strange and beautiful experience. I wanted to take a picture of the room: twenty artists surrounding a tiny television, sitting on tables, couch arms, the floor, so dedicated, so involved. The majority of the suburban people in my community are so wrapped up in their luxurious lives that they don’t have a clue, nor do they care, about what is happening politically, and here I was, sharing space with a group of people experiencing the world and exploring the dark corners of humanity, here they were, living communally, holding their breath for the future of the country. It was gorgeous and heartbreaking. I noticed that when the debate was over, and people started to trickle out toward their studios, the last four to leave were a visual artist from India living in US, a composer from Mexico living in Spain, an Arab writer living in London, and a Belgian writer living in Ireland. It really struck me on a personal level how important this election is to the entire world, how global the implications of our decisions. It also struck me how tiny Americans are, how little emphasis we place on our engagement with the rest of the world. I feel a sense of lack in my acceptance of a stationary existence. Places like this make me want to go, go, go, and never stop. The power of these residencies is no joke. The space and company make you feel like anything is possible. It’s dangerous. There is a sign at the front gates warning artists who are leaving “You are now entering the real world”. Once you are here for a while, the real world becomes a distortion. It is ugly from this side of the fence.

I’ve learned that two weeks is probably not enough at these residencies. The first week is the awkward, finding your place, learning how to be alone phase. Now that I am starting to relax and be comfortable with my time, I feel like things are getting done. I’m focusing now. Most people are here for a month. I can see why.